Dear Family :If you need this service ,please contact Ann at annyangchina@yahoo.com or wechat 470880373 one week ahead,Ann needs to book the train tickets for you

No Shopping Stops ,Authentic tours ,Ann does not take any kind of commission from your trip

The scenic spots along Li River are considered as the highlights in Guilin, and it would be a pity for not visiting there if you have ever been there, and the best relaxing way is to take a cruise. Your private excursion today begins after our guide picks you up from your hotel lobby in the morning. And then we will drive you to Zhujiang dock to board one of the best cruises on the Li River. Our guide will escort you and give you introductions on the different sites along the way. Once you were there, you could know what it means by "picturesque"! The cruise will arrive at Yangshuo after about four hours' sailing. Then a trip to the local villages will be arranged for you to experience deeper rural scenery. After that, you will be transferred back to Guilin. 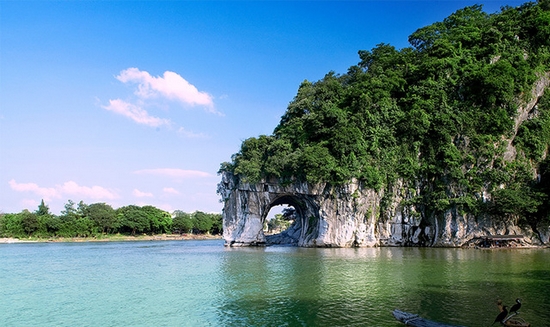 The first stop will be the exquisite Reed Flute Cave. The stalactites, stalagmites, stone curtains and flowers are all lifelike and with various stories, it is honored as the Palace of the Nature Art. And then visit the Seven Star Park, the Fubo Hill and the Elephant Trunk Hill. Fubo Hill consists of several mountain gardens and it is the epitome of the landscape of the city.

Elephant Trunk Hill (Xiangbishan) is the landmark of Guilin. Located in Elephant Hill Scenic Area (Xiangshan Park) at the confluence of Taohua River and Li River, it has been a famous tourism destination since the Tang Dynasty(618 – 907). The hill looks like a giant elephant drinking water from the river. There are not only many spectacular natural scenes around the hill, but also some ancient constructions, such as Puxian Pagoda, Yunfeng Temple, and Sarira Dagoba.

Water Moon Cave is a semicircular cave between the elephant's legs and trunk. At night, the cave and its reflection together form a bright moon on the river. Although Guilin is studded with hills and caves, it is still unbelievable to see such a cave through which a river can flow. The cave is not very large, but there are more than 50 inscriptions on the wall, with the earliest one dating from the Song Dynasty (960 – 1279).

There is another cave on the hillside. Because of its special location, it is taken as the eyes of Elephant Hill.

Story of the God Elephant

There is an old story that circulates among the Guilin people. It is said that Elephant Trunk Hill is the embodiment of a God Elephant, who used to be the mount of the Emperor of Heaven. It was separated from the Emperor in a war and stranded in Guilin with severe wounds. A local couple saved its life and took good care of it. This animal fell in love with the life there and decided not to return to the heavenly palace. The Emperor bestowed a pagoda to help it suppress evils and protect people. Since then, it never left this place and at last became Elephant Trunk Hill. Puxian Pagoda on the top is said to be the bestowed one.

This brick tower was built in the Ming Dynasty (1368 – 1644) to worship Samantabahdra, one of the four most reputable Bodhisattvas. There is a line-carved figure of him on the north side of the pagoda. The tower is located on the top of Elephant Trunk Hill, which not only tallies with this story, but also coincides with the fact that Samantabhadra always shows up riding an elephant.

Yunfeng Temple, on the southwest slope of the Elephant Trunk Hill, is one of the famous ancient temples of Guilin. It was once the dwelling place of Monk Jianzhen, an eminent monk of the Tang Dynasty, crossing over to Japan six times to spread Buddhist doctrines and help regularize monks' behavior.

This scenic area was once the frontline of the Taiping Rebellion (1851 – 1864), a mass civil war in China. The second floor of the temple serves as an exhibition gallery, reviewing this history with historical relics like battle flags, weapons, and cannonballs.

This luxuriant island is to the north of the hill in the middle of the Li River, providing the best position to appreciate the scene and take photos. Not only can you admire nearby scenery from there, but you can also enjoy Tunnel Hill and Pagoda Hill in the distance. A hollow cave named Moon Cave on Tunnel Hill is like a moon hanging in the sky. Together with Water Moon Cave of Elephant Trunk Hill, they form the peculiar scenery of 'Two Moons on Li River', with one of them on the water and the other in the sky.

This night show is another significant feature of the scenic area. Taking the body of the Elephant Trunk Hill as the projection screen, it uses high-tech means, like hypermedia, lasers, and light, to demonstrate beautiful scenery and the culture of Guilin. There are four sections in the show: Primitive Guilin, Mysterious Village, Phantom Theater, and Legend of God Elephant. It depicts natural scenes like thick banyan tree jungles, the beauty of rivers and mountains, and the living conditions of local ancestors. The stunning laser show in the last section creates a totally different visual spectacle of the hill.

Recommended Time for a Visit:3 hours

Located in the five kilometers (3 miles) northwest of the downtown of Guilin, the Reed Flute Cave is a brilliant cave marked on almost all travel itineraries. The cave got its name from the verdant reeds growing outside it, with which people make flutes.

How was the Reed Flute Cave formed? Actually, inside this water-eroded cave is a spectacular world of various stalactites, stone pillars and rock formations created by carbonate deposition. Illuminated by colored lighting, the fantastic spectacle is found in many variations along this 240-meter-long cave. Walking through the serried stone pillars, tourists feast their eyes on changing spots, feeling they are in a paradise where the Gods live.

Tourists enter the Reed Flute Cave and then take a U-shaped sight-seeing route to see different spots, whereupon they exit it from another cave quite near the entrance one. One trip lasts about one hour.

It is a Chinese habit to give each formation a legendary or poetic name such as Crystal Palace, Dragon Pagoda, Virgin Forest, Flower and Fruit Mountain and other interesting names. For some of these names, you need to use your imagination, but the story behind each is quite fun. It's a pleasure to listen to romantic or fairy tales whilst appreciating the fantastic stone formations. Both the stories and the lighting add mystery to the scene. Although there are different kinds of lighting inside, you are not supposed to take photos unless you are a professional photographer, because the light inside is not sufficient for exposure. At some spots, such as the Crystal Palace or Flower and Fruit Mountain, special photography is offered at 20 yuan for one picture. They use special equipment to provide enough illumination. Some 70 inscriptions on the cave wall are said to be travelogues and poems derived from the Tang Dynasty, which made the cave a popular tourist site at that time.

A park is built for the Reed Flute Cave with zigzag path, elegant pavilions, ponds, bridges, plants and other garden structures.

Seven Stars Park, covering an area of more than 120 hectares (297 acres), is the largest comprehensive park with mass scenery in Guilin City. Located at the east bank of Li River, the park is 1.5 kilometers (0.9 mile) from the downtown area of Guilin. It was so named because of the seven peaks, the four peaks of Putuo Mountain and three of Crescent Mountain, inside resemble the form of the Big Dipper constellation.

Flower Bridge, built in the Song Dynasty (960-1279), is the oldest bridge in Guilin. Every spring and summer, it is set off with blooming flowers and the streams, hence the name Flower Bridge. The larruping point of the bridge lies in that the arch's inverted reflection in water always looks like a full moon. It never changes even though the quantity of water changes.

Camel Hill inside Seven Stars Park, looking like a life-like squat camel, lies behind Putuo Mountain. It was once called Hu Shan because it is shaped like a flagon. A hermit in the Ming Dynasty once lived here and grew large numbers of plum trees. In spring, the full-blown plum blossom, together with the rays of the sunrises or sunsets drapes the hill with a gorgeous glow. This is one of the Ten Scenes of Guilin. Around the hill are bonsai gardens, the Guilin Zoo and teahouses.

Crescent Mountain is to the south of Putuo Mountain. It was given this name due to the crescent-shaped stone at its belly. The mountain is reputed for its maigre food, which has a history of more than 100 years. The Nun Noodles are really worth tasting. Walking along the stone steps, you can see Banyue Pavilion, Crescent Rock and Guanghan Pavilion. Standing here, the sights of Guilin City even come into sight! At the southwestern foot, there is Guihai Stele Forest, which consists of Longyin Cave, Longyin Rock. The stele forest has more than 220 tablets, referring to politics, economy, culture and military affairs in forms of poems, posies, couplets and images. The characters in the tablets are inscribed in regular script, cursive script, seal characters and clerical script.

Light of China Square is between Putuo Mountain and Crescent Mountain. It boasts of two craftworks, one is the stone carving murals and the other is Shi Ji Bao Ding (the precious Ding of the century). The mural, made up of more than 100 stone carvings, epitomizes 5000-year Chinese civilization. Shi Ji Bao Ding, a four-legged Ding at a height of 4.6 meters (15 feet), symbolizes that the country flourishes and people live in peace.

Thanks to the pleasant climate here, you can pay a visit to Seven Stars Park at any time of year.

Email Ann at redthreadchina@yahoo.com with any question you might have !